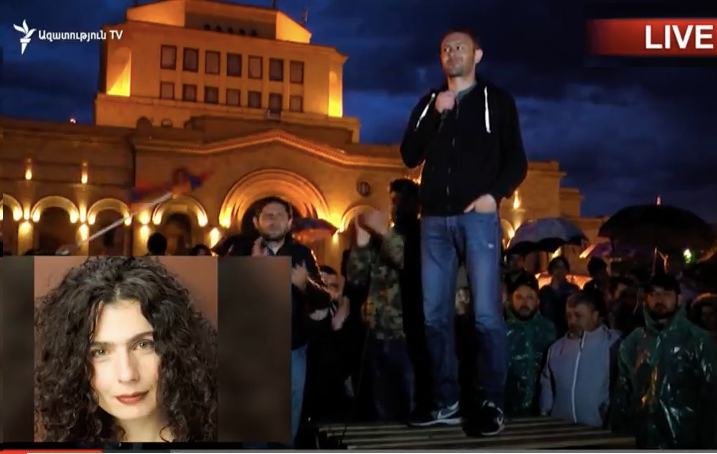 Canadian Armenian actress and director Arsinee Khanjian on April 19 hailed the demonstrators at the Yerevan Republic Square and urged them to hold on to their demands and translate them into concrete political actions.

Her voice was aired during the 7th night of the demonstrations that saw thousands of protesters heed the call of “acts of civil disobedience” by the opposition leader Nikol Pashinian of Yelk parliamentary group.

“When a revolution is calm and disciplined, it is viewed with fear by the scared authorities. Your line of action is legal and truthful,” she said, urging the crowd to not be disillusioned this time.

Khanjian reminded the demonstrators that they have many friends and supporters in the diaspora like Vahe Berberian, Atom Egoyan, Serge Tankian and Eric Nazarian, who have condemned the corruption and the authoritarian regime in Yerevan.

She urged them to work with the opposition in parliament to come up with concrete demands for change. “Let not the street voice be heard as a voice of complaint only, but translate those concerns into concrete suggestions,” she urged.

Khanjian called on the police to refrain from harming the protesters, instead to guard the safety of the revolting youth and side with the demonstrators. Addressing the prime Minster, she urged him to resign in order to save the country from turmoil.