“Azatutyun”- German Chancellor Angela Merkel laid flowers at the Armenian genocide memorial in Yerevan at the start of her first-ever visit to Armenia on Friday.

Merkel arrived in the Armenian capital on the second leg of her tour of the three South Caucasus states. 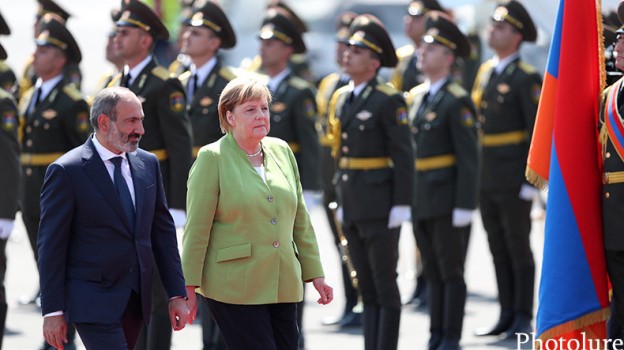 Immediately after being welcomed by Prime Minister Nikol Pashinian at Yerevan’s Zvartnots airport, Merkel headed to the Tsitsernakabert memorial to some 1.5 million Armenians that were massacred by the Ottoman Turks during the First World War. She laid a wreath by its eternal fire and planted a symbolic tree in an adjacent park.

Germany’s parliament, the Bundestag, recognized the massacres as genocide in a resolution overwhelmingly adopted in June 2016. It also acknowledged that the German Empire, then a military ally of Ottoman Turkey, did nothing to stop the killings.

The resolution was drafted by lawmakers representing the main parliamentary factions, including Merkel’s Christian Democratic Union (CDU). Although the German leader did not take part in the vote, she reportedly backed the measure in an internal party straw poll.

Turkey reacted furiously to the resolution, recalling its ambassador in Berlin. Successive Turkish governments have for decades vehemently denied a premeditated effort to exterminate the ethnic Armenian population of the crumbling Ottoman Empire.

A senior CDU figure told fellow German lawmakers in September 2016 that Merkel is not distancing herself from the Bundestag resolution despite the angry Turkish reaction.