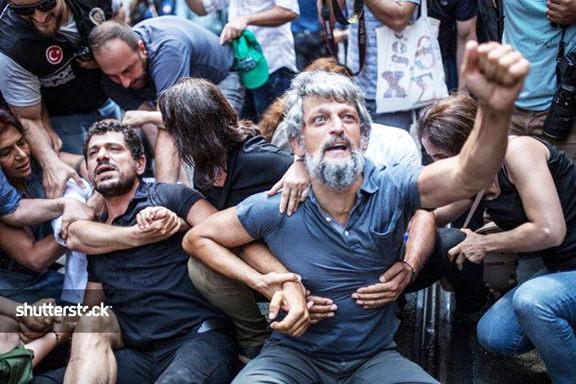 “Asbarez”, ISTANBUL—Garo Paylan, an Armenian member of the Turkish Parliament representing the People’s Democratic Party (HDP) on Saturday found himself on the front-lines of a clash between peaceful protesters and police and himself was attacked and dragged by law enforcement when he tried to prevent the police from arresting Hrant Dink’s son, Arat who had also joined the protest.

The event was a gathering of families and friends of those who disappeared in police custody known as the “Saturday Mothers.” The group comprised of mainly Kurds and Alevis, has been gathering at a park near Taksim Square in Istanbul for 700 consecutive Saturdays.

Paylan, Dink and other had urged the police to reject violence, but in turn they were pushed back as they formed human shield to protect the protesters. Instead the police used tear gas to disperse the protesters and according to Turkish media reports some 20 people were arrested.

The scuffle reached its peak when police attempted to arrest Arat Dink, the son the assassinated Agos editor, Hrant. Paylan successfully intervened and blocked the police effort to arrest Dink. He was also physically dragged and shoved.

The police attempted to arrest Paylan as well, however, he told them that he is a member of parliament and his immunity prevented the police from taking the opposition leader into custody.