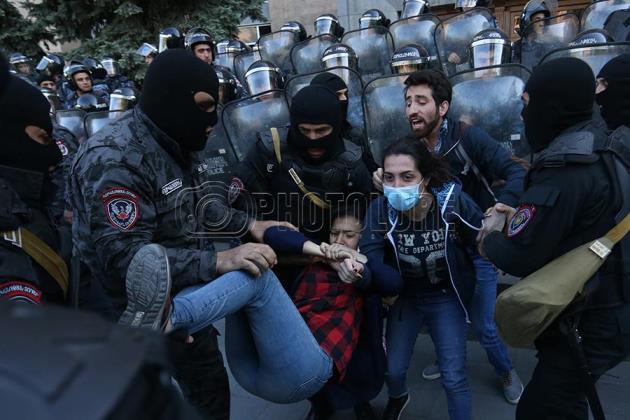 Armenia – Police use force against opposition protesters blocking the entrance to a government building in Yerevan, 19 April 2018.

(Azatutyun)- Riot police cordoned off a major government building in Yerevan and pushed aside opposition supporters blocking its entrances on Thursday morning on the seventh day of street protests against Prime Minister Serzh Sarkisian.

The sprawling building houses the Armenian ministries of agriculture, health, labor and social affairs and several other government agencies. Opposition leader Nikol Pashinian and dozens of his supporters gathered around it at 8:30 a.m. in a bid to prevent government employees from going to work.

“We are calling on you not to be afraid and to declare that you don’t recognize the authority of Serzh Sarkisian and ministers appointed by him,” Pashinian appealed to civil servants. “Take a step and reject Serzh!”

Riot police wielding batons and shields already guarded the three entrances to the building adjacent to the city’s central Republic Square when the protesters approached and formed human chains around them. A larger number of security forces, among them masked officers of a special police unit, arrived at the scene moments later, detaining at least 20 protesters and forcibly removing many others.

One female protester was injured in chaotic scenes. The police defended their efforts to “halt violations of public order” in a statement released later in the morning. The police have repeatedly threatened to end the protests altogether, saying that they are not sanctioned by municipal authorities.

The use of force allowed government employees to make their way into their officers. Some of them looked on and even took pictures from their office windows as Pashinian and a growing number of protesters continued to demonstrate nearby.

The crowd then marched to other parts of Yerevan, with Pashinian urging those car drivers who are “against Serzh” to honk their horns.

The opposition action apparently forced Sarkisian to postpone his first cabinet meeting by several hours. Such weekly meetings normally start at 11 a.m. in another government building located on Republic Square. Pashinian planned to hold another rally in the square at 7 p.m.